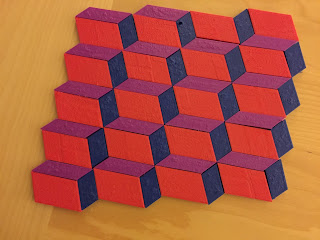 While at GMU, Tyler White worked with me on his senior thesis. He then went on to get a PhD at George Washington University on mathematical questions for certain tilings in the plane. He asked if I could print a set of these three different tiles that appear in his PhD thesis. It looks really cool because though it is two-dimensional, it is a projection of a three-dimensional object, so gives the impression of depth. In fact, this picture above is so misleadingly three-dimensional looking that I had to print another one with my hand in it to make it clear that the shapes really are flat. 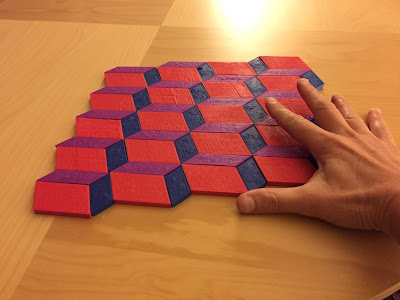 The way I arranged it is boring from a mathematical standpoint, since it is completely uniform. In his thesis, he studied aperiodic tilings using this set of tiles. I've asked him to explain the details. Here's a portion of an aperiodic arrangement: Here's the full figure from the PhD thesis: 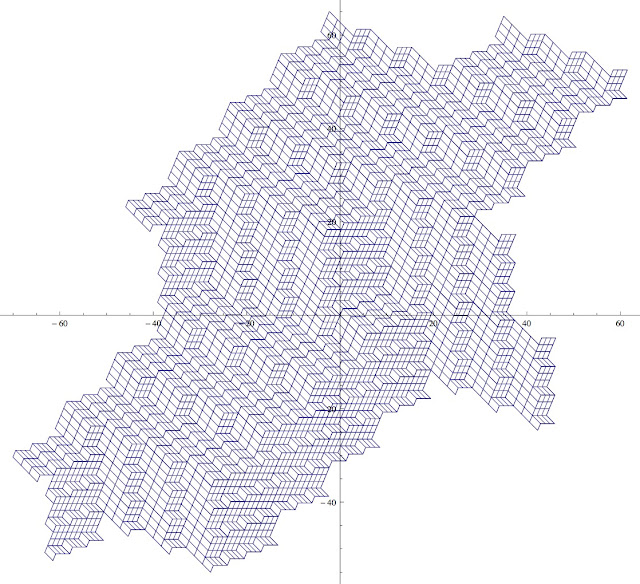 Here is Tyler White's full explanation of what this represents:

This tiling is part of an infinite tiling of the plane.  This tiling was originally constructed by Richard Kenyon in his 1996 paper called “The Construction of Self-Similar Tilings” published in the journal of Geometric and Functional Analysis.  This tiling is aperiodic in the sense that if a fixed reference point is chosen, and then the tiling is shifted in any direction, it is impossible to have the exact same tiling you started with.  Kenyon’s goal in the paper was to demonstrate the construction of a self-similar tiling (this tiling is only pseudo self-similar) by using a generalized substitution.  Though the tiling is aperiodic, it is generated in an algorithmic manner by a tiling substitution.  As a result, the tiling as a certain amount of regularity to it.  In fact, for any pattern found in the tiling, there is always another copy of the pattern within a fixed finite distinct (the distance you would have to look depends on the size of the pattern you are looking for), this property is known as bounded gaps.  Former George Mason University undergraduate Mathematics major Tyler White in his 2012 Ph.D. dissertation in Mathematics at George Washington University under the direction of E. Arthur Robinson, Jr. showed that under certain conditions (the shown tiling satisfies these conditions) the tiling is also topologically mixing, which is a stronger type of regularity conditions than the bounded gap property mentioned before.