Level sets which are one and two sheeted hyperboloids

for c = -1, 1. The level sets are hyperboloids of one and two sheets.  It is designed and printed by Chloe Ham, GMU Math Makerlab. 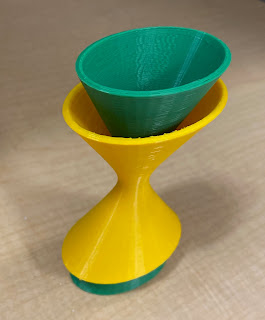 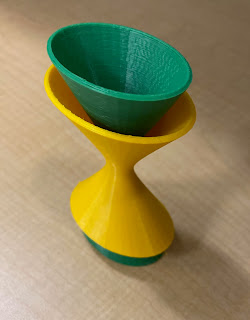 In a foray beyond 3D printing, here is my first test of laser cutting math, cut at the Mason MixLab at Innovation Hall, designed in http://math.hws.edu/eck/js/symmetry/wallpaper.html and prepared as an svg file for laser cutting in Inkscape. 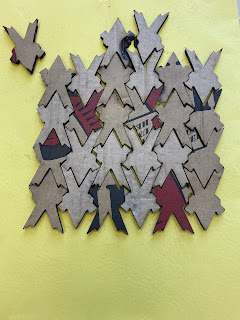 This was inspired by the work shown below by students from last semester Savannah Crawford, who designed it, and Katherine McCabe, who transferred the design to laser format and cut it in acrylic.  This is in my office, and it will soon hang in the department not in my office.

Since it's hard to read the text, I have included it below the photo. 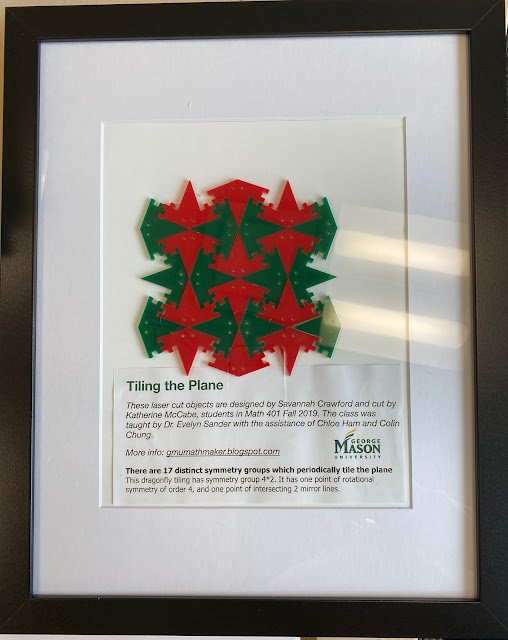 Tiling the Plane
These laser cut objects are designed by Savannah Crawford and cut by Katherine McCabe, students in Math 401 Fall 2019. The class was taught by Dr. Evelyn Sander with the assistance of Chloe Ham and Colin Chung.
More info: gmumathmaker.blogspot.com
There are 17 distinct symmetry groups which periodically tile the plane
This dragonfly tiling has symmetry group 4*2. It has one point of rotational symmetry of order 4, and one point of intersecting 2 mirror lines.

For two-variable functions, the level  sets {(x,y): c = f(x,y)} are curves in the plane. For three-variable functions, the level sets {(x,y,z): c = f(x,y,z)} are surfaces in three-space.  This surface show the level surfaces of exp(xyz) for c=0,1,2,3. It is designed and printed by Colin Chung, GMU Math Makerlab, inspired by a previous version designed by former student Anneliese Slaton which she wrote about on: http://gmumathmaker.blogspot.com/2016/04/level-sets.html 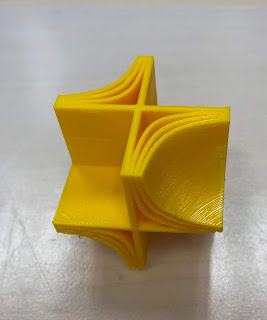 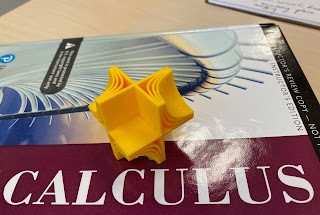 Posted by Evelyn at 9:53 AM No comments:

Check out the code from my Construct3D 2020 talk. OpenSCAD and Mathematica tutorials and  files for creating math:

http://math.gmu.edu/~sander/EvelynSite/construct3d2020.html
Posted by Evelyn at 1:04 PM No comments:

The Magic of Riemann Surfaces by Connie Quezada

A Riemann surface is a surface-like configuration that covers the complex plane with several “surfaces”. The surfaces could either be simple or complicated structures and interconnections. The surface is actually a 3D Projection of the 4D figure. The Riemann surface is constructed from two copies of the complex plane, and the idea is that each input value of z lies directly below its corresponding points on each layer of our Riemann Surface.
For the Surface z^2 +r, where r is a real number, appears to be a ‘pringle shape. At the center of the shape is our real parabola x^2+1where the imaginary part of our complex function is zero and then above and below the center or the part of the parabola that look like “wings” would be where the imaginary part of our complex function is nonzero.
For the surface z^2 + i,this equation has no values where the equation would be purely real. With this being said the 3D projection looks like it is intersecting itself, however in 4 Dimensions it is technically not intersecting itself but more like ‘passing’ over itself. 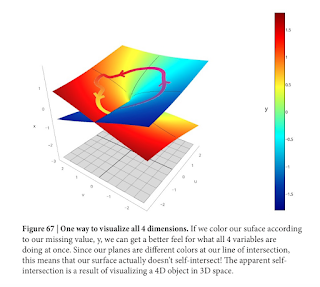 Both of the print for the Riemann surfaces were designed in Mathematica and took about 2 hours to print each on a Makerbot Printer. Under each surface I placed a simple ‘Disk-like’ base I designed in OpenScad, and I simply sliced the two STL files together to get the final object that I would print.

This post is created by Khalilah Hamer of Math 401: Mathematics through 3D printing  at George Mason University.
This week we were challenged to look back at our previous assignments and redo or recreate one that did not have the best final project. I had a few slips here and there for projects but one print that I wanted to redo was my chaotic attractor print. I recreated the Aizawa attractor which I thought would be a really cool print and my finished project looked great on the computer, although with the need for natural filament making the print take much longer than originally planned, I had to scale down the print drastically. This caused the tubes of the attractor to become thin and brittle which was not what I had hoped for.

I am redoing the chaotic attractor and this time, to do more than just adjust the tube width, I decided to recreate another attractor. I recreated the Lorenz Attractor and this time making sure the tubes are greater than 1cm (the Aizawa was about 5mm). When making the tubes larger they sort blended together and it was harder to see the details so I decreased the 'timelength' to 30 to create a better visual, as 3D printing really helps the visual aspects. 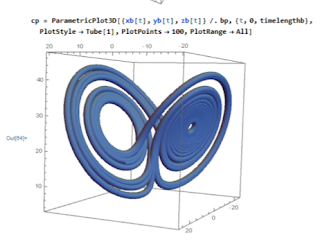 To get more into the chaotic attractors they are defined as an attractor of chaotic dynamical systems in chaos theory. This is where two points on the attractor are near eachother at one time but will be far apart at later times as long as the system remains on the attractor. For example, this math can be used to “predict” or get a good guess at climate as it is chaotic and can’t be predicted. The Lorenz attractor is the set of solutions to the Lorenz system, founded by Lorenz himself. It was initially to resemble the convections of the atmosphere. It is said the shape resembles a butterfly and is sort of how the name the butterfly effect came to be as even when you know the simple initial conditions a small rush of wind from a butterfly’s wing can through the whole system in well, chaos.

The Lorenz attractor is a strange attractor consisting of 3 equations as follows as well as the constants.

I used the initial conditions of 0 for x, y, and z. On my readings of the Lorenz attractor I got the constants as these are the most commonly used with this attractor.
Recreating the mathematica code was more simple than the first time around as I could use my previous attractor code as a guide. Lastly I added a stand to help the print not collapse mid print and to allow the attractor to be displayed.

This is a Julia set. For this Julia set the function that I chose to use is (z^2 - 1)/(z^2 + 1). The reason why I picked this function is because when I was messing around online, I figured out that thus one reminded me of a cell. That is why I called this print the Julia cell. When typing the code, I could figure out how to make it 2d but I struggled to make it 3d. Eventually I graphed all of the points then made an image mesh. From there I did the region product of it in order to give it some height. This is what my code looked like: 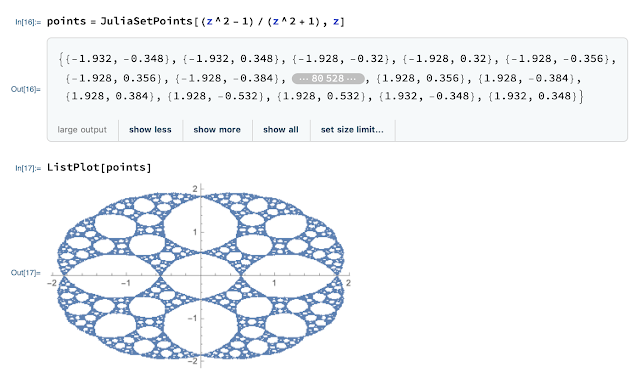 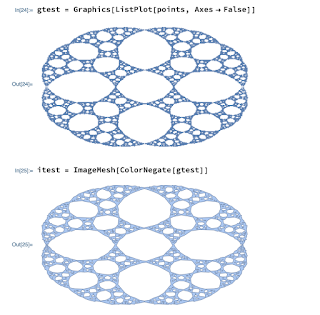 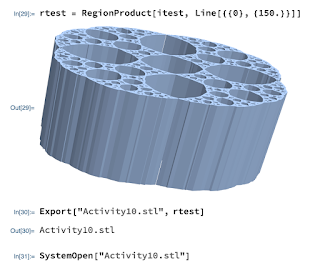 When writing the code to print some struggles that I encountered the majority of my problems. The main problem that I encountered was trying to get my print time down. When I printed it vertically it was over 36  hours long. I did print it on a raft on the makers bot. This is what my final print looked like: